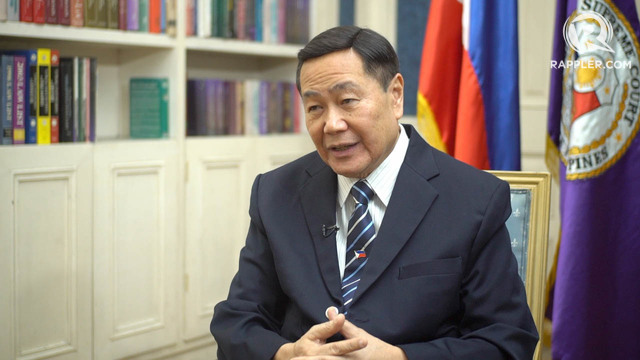 Carpio disclosed this in a recent Rappler Talk interview with Rappler editor-at-large Marites Vitug, saying joint exploration in the West Philippine Sea should not be limited to China alone.

“Yes, I would welcome the participation of Rosneft…. because we should be spreading our service contracts. We should have one, or maybe several with China, some with the Western countries, including Russia,” Carpio told Rappler.

Rosneft is a state-owned enterprise of Russia and is the biggest oil and gas exploration of the northern country. The company is currently helping Vietnam to explore for oil and gas in waters within Vietnam’s exclusive economic zone, which is also being claimed by China.

Unlike China, Russia does not claim sovereign rights over waters in the South China Sea and its companies are willing to explore for natural resources as contractors of states with such rights.

Dealing with China: Duterte’s invitation to Rosneft comes as the Philippines is pursuing a memorandum of understanding (MOU) with China on joint oil and gas exploration in the West Philippine Sea.

The two governments have already formed committees tasked to draft contracts covering specific areas. State corporations from both countries have been designated as default implementors of such contracts.

Both Manila and Beijing are expected to meet and finalize proposed areas for exploration by November this year.

The MOU also specifies oil and gas exploration would be done without prejudice to the legal positions of both the Philippines and China.

For these reasons, Carpio said the MOU, once finalized, may be the solution to the South China Sea dispute.

“If this can be done, this will be the template for the formula, for the peaceful solution of the South China Sea dispute because if we accept this, if it’s acceptable to us, and probably be acceptable for Vietnam, Malaysia, Brunei, Indonesia,” Carpio said.

“Then we have found the formula to settle peacefully the maritime dispute at least. Not the territorial dispute, that will continue,” he added.