MANILA, Philippines (AP) — The Philippines’ military chief flew to a Filipino-occupied island in the South China Sea on Monday and vowed to defend the territory and help develop tourism and marine resources there amid disputes with China.

Gen. Gregorio Pio Catapang, accompanied by journalists and other military officials, said he visited Pag-asa Island to establish that the island is part of western Palawan province and “therefore Pag-asa is a territory of the Republic of the Philippines.” The island’s international name is Thitu, and Chinese name is Zhongye.

He vowed to defend it and other Philippine-claimed islands in the area from aggression.

He said he was coordinating with Mayor Eugenio Bito-onon on how the military can help implement the local government’s development plans, including tours to the island.

The visit comes amid protests in the Philippines over China’s stepped-up reclamation work on Philippine-claimed islands and aggressive maneuvers against Filipino air patrols and fishermen. 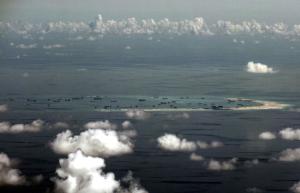 Mayor Bito-onon told reporters the local government is acquiring a 25-meter steel boat which can be used beginning next year to ferry tourists on the 26-hour trip from Palawan’s mainland to Pag-asa and other islands within his municipality of Kalayaan. He said they also need a harbor to support a fishing industry, and to expand the 1.2 kilometer-long runway on the island where 85 civilians live.

Catapang said his visit, made on the invitation of the mayor, should not fuel more tensions with China. He came to see how the military can support Bito-onon’s “tourism for peace” plan, and to say goodbye to troops stationed there before he retires in July, he added.