The Philippine Navy’s largest warship, bought second hand from the United States, will sail into the West Philippine Sea crossing over from the Pacific in the next couple of weeks, while China’s first aircraft carrier is expected to go on sea trials by the end of September.

In the event of a conflict over the Spratlys, where both the Philippines and China have claims, both ships may see action. The Philippine ship is a former US Coast Guard cutter.

Just how do these two battleships stack up against each other? GMA News has produced this scale graphic representation to compare their sizes — and, for added comparison, threw in a representation of Metro Manila’s Light Rail Transit train. 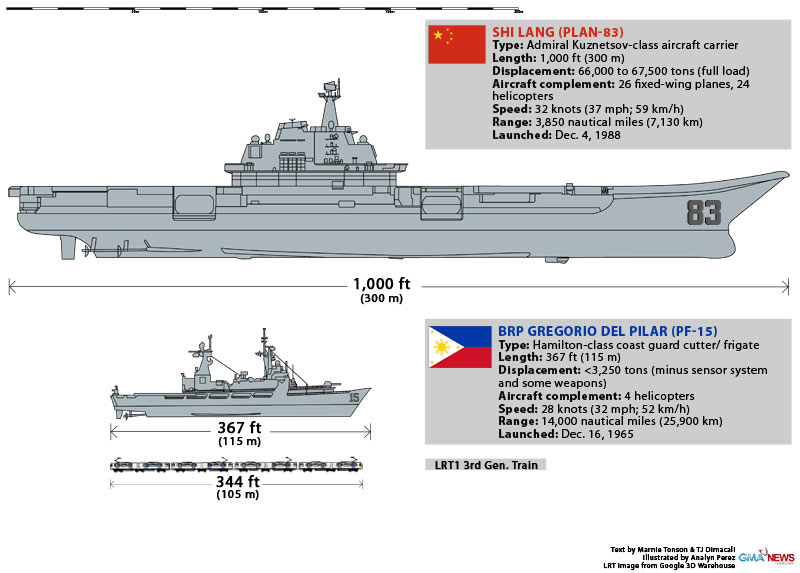 click here to view larger image
The comparison between the two, as well as between the military forces of each country, is of course lopsided, hence the need for the Philippines to be allied with another superpower, the United States.

Despite its size — it will be the largest ship in the Philippine Navy — the Philippines’ BRP Gregorio del Pilar was designed to serve in maritime law enforcement, and search and rescue missions. Thus, it is equipped to carry only helicopters.

China’s aircraft carrier, on the other hand, is capable of projecting power way beyond China’s mainland territory, and can accommodate as many as three dozen fighter jets.

More details about each ship below.

The BRP Gregorio del Pilar (PF-15) was formerly known as the US Coast Guard Hamilton [High Endurance Cutter (WHEC)-715] and was transferred to the Philippine Navy on May 13, 2011.

The Del Pilar was bought by the Philippine government for the price of P450 million (around US$13.18 million) under the US Excess Defense Articles (EDA) program, paying with money from the Philippine Malampaya project over which the ship will ensure maritime security.

President Benigno Aquino, in his State of the Nation Address last July 25, made the ship a symbol of the nation’s defense build-up, coinciding with rising tensions in the Spratlys.

“Soon, we will be seeing capability upgrades and the modernization of the equipment of our armed forces. At this very moment, our very first Hamilton Class Cutter is on its way to our shores,” Aquino said in his SONA. “We do not wish to increase tensions with anyone, but we must let the world know that we are ready to protect what is ours.”

It was originally designed to carry a 20 mm Phalanx CIWS (Close In Weapons System) designed to shoot down anti-ship missiles and fixed-wing aircraft, but the weapons system was removed by the US and transferred to another US Coast Guard ship. Instead, the US installed additional radar and other electronic equipment as part of the transfer agreement with the Philippines.

China’s first aircraft carrier, one of the Soviets’ last

The Shi Lang (PLAN 83), formerly the Varyag, is one of only two Soviet-era aircraft carriers of this class that exists, the other being the Kuznetsov, which is still in Russian service.

At the shipyards of the former Soviet state of Ukraine, the yet unfinished ship was bought at auction for US$20 million by a company widely believed to be a front for the Chinese People’s Liberation Army Navy (PLAN), under the pretext that the ship would become a floating entertainment center and casino.

Originally built to be a 90,000- ton nuclear-powered ship, the Varyag – which would eventually become the Shi Lang – was scaled back to a 65,000-ton ship that lacked the steam catapults used on American carriers to fling aircraft into flight; instead, the Soviet-era carrier uses a ski jump type flight deck.

It is not nuclear powered.

The 323 meter (1,000 foot) long ship was meant to regularly carry 36 Su-33 airplanes and sixteen helicopters, with a crew size of 3,000 complementing the full aircraft load. The ship carries 2,500 tons of aviation fuel, allowing it to complete 500 to 1,000 aircraft and helicopter sorties.

Among the Shi Lang’s armaments is a ten-barreled Gatling gun Close-In Weapon System (CIWS) which is based on China’s older, seven-barreled, Type 730 system capable of firing 5,800 rounds per minute.

In comparison, the U.S. Navy’s Phalanx CIWS gun —like the one on the BRP Gregorio del Pilar— has only six barrels. — TJD, GMA News