My lawyer friend was fuming mad when he found out that China etched its new passport with the nine-dash line—the U-shaped demarcation line circumscribing about 90 percent of the 3.5-million-square kilometer South China Sea on China’s maps. 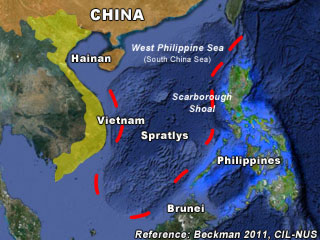 He was particularly concerned by its ramifications, not only because China can now unilaterally warn or confront anyone who crosses its imaginary boundary, but also because other countries may unwittingly end up accepting Chinese sovereignty over those areas by the mere act of stamping the passport.
I had a different reaction.
I was amused rather than angered at such a childish gag of drawing a line in the sand, I mean, in the water. I may have even cracked a smile.
China’s action reminded me of a childhood bully who peed a horizontal line on the sand field of our elementary school playground.  He’d stood behind the line and warned other kids not to cross what was his zone.
I know it seems hilarious but actually it’s not funny at all.  For me, it’s all about a conflicted, oversized, and privileged bully who speaks of the ideals of a classless society, and yet lusts to have more in life at the expense of those who have less.
And this kid seems unmindful of his behavioral dissonance.
Never mind that international maritime law experts assail his alleged dotted line as historically spurious, technically vague, and legally baseless.
Never mind that even Yin Wenqiang, a senior Chinese maritime law expert, had admitted that he was unaware of the historical basis for the nine dashes.
In short, never mind that this bully’s crayon-like drawing of alleged historical waters is so convoluted that even spin doctors must be jealous of its creativity.
For me, this image of a bully is the crux of the matter. As the new cockalorum on the playground, he likes the rough and tough play.  And I guess the rougher and tougher it is, the better for him to intimidate everyone into kowtowing to his demands, or else.
He likes to dominate. He dictates the other kids what game to play and how he wants them to play. Genius!
Well, there’s that game of establishing the new Sansha City in the West Philippine Sea; there’s that game of insisting on bilateralism; there’s that game of naval exercises with Russia; there’s that game of sending the People’s Liberation Army to violently kick the occupants out of a shoal; or there’s that game of escorting his fishermen with gunboats, just to name a few.
What’s next?
The point is, this bully is content that we simply react as he comfortably moves the goalposts of each game from side to side to control the situation. In other words, he intends for us to simply respond like a lab mouse on a wheel spinning ever faster, but going nowhere.
The unfortunate thing about this is that at the moment there are no supreme international bodies that other claimants such as the Philippines, Vietnam, Malaysia, Indonesia, Brunei, or Taiwan can appeal to since China unilaterally eschews international mediation. Needless to say, as a permanent member of the UN Security Council, it can simply veto any attempt to enforce any ruling inimical to its alleged territorial interest.
And so, what do we do?
First, we need to acknowledge the fact that we got beat. We must be brutally honest with ourselves so that we can step back and figure out what we did right and what we did wrong.
Second, we need to recognize that at the moment, no one is really coming. There is no cavalry about to appear on the horizon. We have no option but to deal with this matter on our own.
Third, we need to admit that we are already in the midst of a big fight. And our backs are pushed into a corner. With a swollen cheek, a bloody nose, and a split lip, we cannot get beat up anymore.
Finally, we need to accept the reality that unless we push back and push back more forcefully, we cannot expect a different result.
If China etched its passport with the South China Sea, why can’t we etch ours with the West Philippine Sea? If it blocks our fishermen from fishing in Spratly, why can’t we block theirs too? If it constructs shelters in our reefs, why can’t we construct our own too? If it does a military exercise in South China Sea, why can’t we do our own military exercise in West Philippine Sea too? And why not invite India, Japan, or the United States to join us in our regular defensive maritime drills?
What I’m saying is that despite our humble condition and limited resources, we can still summon our courage to fight back and to fight well. Like the proverbial David vs. Goliath battle, let’s all gather our imaginative and creative slingshots and fight!